The second ordinary meeting of the Board for 2018 was also an occasion to bid farewell to Dr Max Price, who, on account of vacating the University of Cape Town’s Vice-Chancellor seat at the end of June, was also attending his last AGM and ordinary meeting of the Board. During his tenure as Vice-Chancellor and Principal of the University of Cape Town, Dr Price has occupied the position of Vice-Chairperson of the then Higher Education South Africa (HESA), in which capacity he also became a member of the organisation’s Executive Committee. He has subsequently chaired the Funding Strategy Group and, in that capacity, represented HESA’s numerous advocacy efforts for adequate funding to the higher education sector. He was one of HESA’s four nominees to the Policy Dialogue between NSFAS, DHET, the National Treasury and the South African Union of Students (SAUS) that was tasked in 2014 to engage on and address challenges of NSFAS. Dr Price has also been the Chair of the Advisory Board of the Higher Education and Training HIV/ AIDS (HEAIDS) Programme, which became the Higher Education and Training Health, Wellness and Development Centre upon breaking away from USAf to become an independent entity in January 2017. 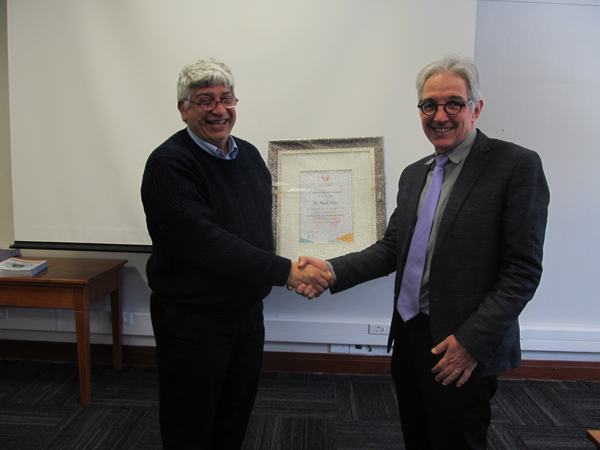 Prof Ahmed Bawa, USAf’s Chief Executive Officer (left), hands a token of appreciation to Dr Max Price, for his meaningful contribution over the years to the work of USAf.  “Thank you, Max,” said Prof Bawa in his recent farewell message. “You will be sorely missed.”

In his final address to the USAf Board of Directors, Dr Price said this was a bitter-sweet moment for him. “We’ve been through good and difficult times together. Through group WhatsApp discussions, we created a spirit of camaraderie and gave one another support through it all. Yes, we differed on certain matters and at some point, there was a threat of a split. But we held it together very well. I therefore pay tribute to the USAf Office, the Chief Executive Officer and his team that make these meetings happen and be effective. I thank you all and wish you a bright future.”