The 6th Research and Innovation Dialogue of Universities South Africa (USAf), held at the Emperors’ Palace from 31 May to 1 June, attracted up to 80 delegates, who were representing all of South Africa’s public universities – at the level of vice-chancellors, deputy vice-chancellors and directors responsible for research and innovation. Senior leaders from the National Research Foundation and other science councils were also in attendance, as were representatives of the German, Japanese and Swiss embassies in South Africa, as well as industry representatives and senior officials from the departments of Higher Education and Training and Science and Technology.

According to Professor Cheryl de la Rey, Chairperson of USAf’s Research & Innovation Strategy Group (RISG), who is also the University of Pretoria’s Vice-Chancellor and Principal, the Research and Innovation Dialogue is a platform for engagement on matters of collective interest for research and innovation. “We see this as a significant opportunity to facilitate learning and to deepen understanding on topics of high relevance within the university sector.” This year’s Dialogue focused on two themes: Post-graduate Training and Funding on Day One and Internationalisation and Inter-institutional Collaboration on Day Two. 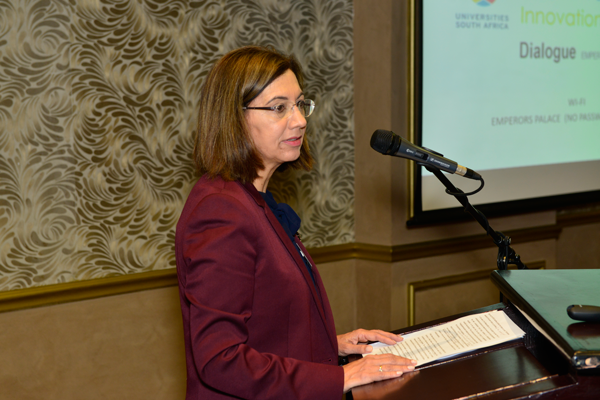 “We’re deeply concerned about declining public funding of post-graduate education, hence it is one of two themes for the R&I Dialogue 2018, which reflect our priorities for the current year.”

Whereas two government ministers who graced the event agreed that public funding for research in South Africa could be improved, Science and Technology Minister, Mrs Mmamoloko Kubayi-Ngubane, looked to the private sector to level the playing fields. “We are putting policies in place to ensure that the private sector starts investing in research and development in South Africa,”said Hon Kubayi-Ngubane, adding that a Draft White Paper,  ready for presentation to Cabinet during June 2018, was making provisions for this, among other matters. 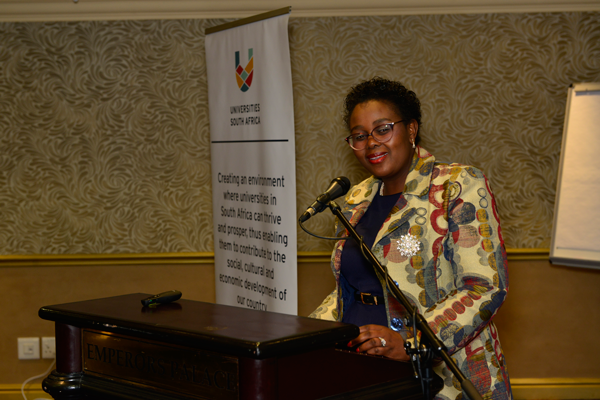 “Public funding for research in South Africa has to catch up with that in other economically comparable countries,” Hon Kubayi-Ngubane said. “Our current investment in research is just over 0.7% of the GDP and it is nowhere near our set target of 1.5 %.”

Her counterpart from Higher Education and Training, Hon Naledi Pandor, conceded that government had made the commitment over a decade ago, to raise research and development spending from the less than 1% today to 1,5% of GDP by 2019. Admitting that this target was probably out of South Africa’s reach, Minister Pandor suggested that the pursuit of research partnerships might well be the way to go, to improve performance in this regard.  “I think we will have to map out a set of desired partnerships that we will concretise over the next two years and possibly report on outcomes in 2020.”

Partnerships are the way to go, Pandor suggests

Making reference to the targets set in the National Development Plan to increase, among other matters, the percentage of academics with PHDs to over 75% by 2030, Minister Pandor advised that USAf, DHET and DST need to jointly craft a set of partnership proposals that would support the training and graduation of thousands of researchers. “Commonwealth countries with research-intensive institutions should be approached to partner with South Africa on such an initiative. South Africa’s team should design the partnerships with due regard to the socio-economic sectors such as agriculture, ocean economy, advanced manufacturing, urban planning and rural development. Our team should also seek to develop research focus areas that encourage tran-disciplinarity and access to a mix of discipline knowledge.”

Minister Pandor further said that South Africa’s look to the Commonwealth should not exclude Africa and countries of the South. “Our experience suggests there is much for us to learn about entrepreneurship from countries such as Somalia and Zimbabwe – we could collaborate with colleagues and institutions in such countries.” The Higher Education and Training Minister said interventions aimed at improving research should also seek to lift the historically black institutions out of their long-standing struggle to attract leading researchers and teachers, and also high quality post graduate students.

She announced that her department was also putting in place new policy instruments to bolster South Africa’s research and development programme. In addition to the Policy on Internationalisation which sought to support, inter alia, international collaborations with universities beyond South Africa’s borders, DHET was working on a National Plan for Post School Education and Training that would set out a Framework for the differentiation of higher education institutions in South Africa. “The plan suggests that while all institutions will teach, carry on research and engage in community outreach, they will also have a discernable identity: teaching-intensive, research-intensive or technology-intensive. All institutions will strive for high quality in their chosen niche.” 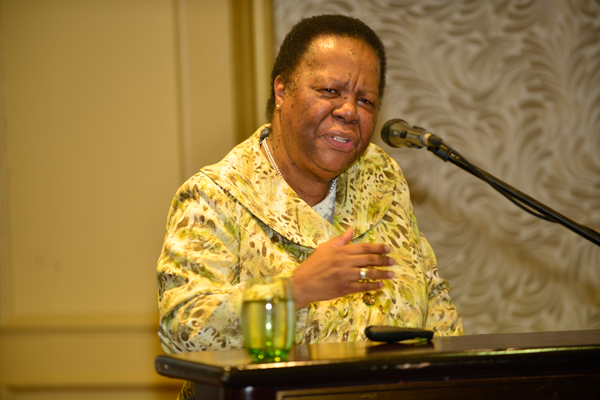 “I look forward to hearing universities’ proposals on these two important documents (the Internationalisation policy and the National Plan for Post School Education and Training), and to implementing them with your support.”

Funding solutions at the disposal of SA’s public universities

Universities must be supported to produce quality research, innovation and skills for future employment – says the Association of Commonwealth Universities‘ Chief Executive

Allocating a proportion of development funding into research and innovation, and into higher education, is the best that governments the world over can do, to become sufficiently innovative, and to create jobs of the future. This was stated by Dr Joanna Newman, Executive Director and Secretary General of the Association of Commonwealth Universities (ACU), She was delivering a keynote address at the Research and Innovation Dialogue of Universities South Africa (USAf), held in Johannesburg recently.

Dr Newman stated that although employment in the future was linked to innovation, and also to acquiring tertiary education and skills, it was common knowledge that there were too few universities to meet the current demand for higher education. She therefore urged associations of universities, like USAf, to consider strengthening collaborations with their counterparts, both in the North and South, especially to grow lecturers, researchers and doctoral candidates so critical to skills continuity within universities, industry and governments.

Citing evidence presented by Elsevier and SciVal, two global information analytics companies which evaluate global research performance by institution, country and geographical block, Dr Newman said that even though institutions in the United States and the European Union were leading on two pillars forming the Times Higher Education rankings, namely the volume of citations and industry income, respectively, it was interesting that universities in the Commonwealth outscored their American and European counterparts on international research outlook. “Commonwealth countries enjoy a lead in research quality. The lead in international outlook is much more significant. They outscore the US and the rest of the EU in the percentage of collaborative international research.”  This implied that by strengthening research collaborations, Commonwealth countries – including South Africa, positioned themselves to compete favourably in innovation and economic development on the global arena.

Dr Newman mentioned that between 2012 and 2016, South Africa was counted among the top ten Commonwealth countries in terms of research output – this, according to data collected by Elsevier and SciVal. South Africa’s percentage-rated research growth of 35% was higher than all the countries ahead of it, e.g. India.  South Africa, as an emerging research nation with a large volume of scholarship – was therefore, along with Malaysia and Nigeria, well ahead of India in terms of international collaboration. South Africa was therefore fast closing the gap between itself and the countries ahead of it in research. 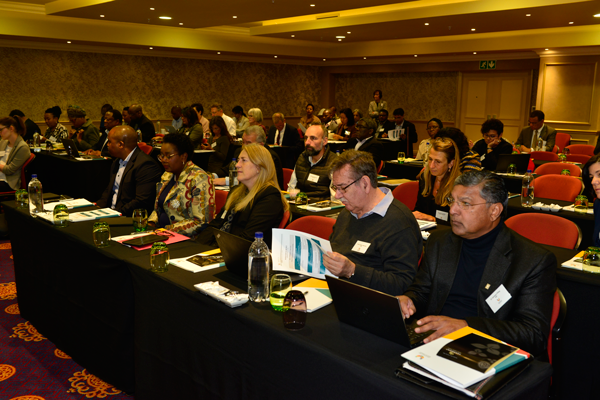 Dr Newman commended South Africa for having built an impressive record of doubling research output by 50% from 2011 to 2014  to reach doctoral graduates output of 1,800 a year.  “However, to produce the national development plan target of 12,000 a year by 2019 remains a challenge,” the ACU Chief Executive stated – echoing what had already been stated by the Ministers of Higher Education and Training, and Science and Technology. She thus underlined the importance of strengthening the country’s research collaborations and the value that collaboration yielded to the participating institutions — and nations.

In the context of funding opportunities available for post-graduate studies, Dr Newman outlined the various scholarship schemes managed by her association on behalf of the government of the United Kingdom. Examples included:

She said the production of doctoral graduates was central to the assumption of the knowledge economy.  In addition to the shortage of doctoral candidates in the Commonwealth system, Dr Newman acknowledged other challenges, including concerns for equity and inclusion, especially of women researchers and people from designated groups.  “If universities are to increase their research output, they need to strengthen post-graduate training and post-graduate research,” Dr Newman said.  She also conceded that less than optimal institutional support for academics, and the absence of incentives for collaborative research including international collaboration were endemic challenges across the Commonwealth.  In order to address this problem she advised institutions to include in their policies, some provision for international collaborations.

She said in the many years that the ACU had supported post-graduates’ mobility schemes, she had come to realise that contrary to the previous model of sending doctoral students to spend three to four years away from home studying at foreign institutions, it was much more practical to send candidates away for no more than one year at a time — under the Commonwealth Scholarship Commission — and bring the candidates back home.  This enabled the students to train at two faculties,  co-supervised by the collaborating institutions. “Not only will the student get — sometimes a joint PhD, but also the faculties will get to know each other. Other candidates will follow. There will be trailblazers, and additional post-doctoral opportunities will arise, that see candidates spending up to two years at any other university in the Commonwealth.” She said this arrangement had seen the Commonwealth Scholarship Commission favouring South Africa-UK partnerships, in particular, because of the long-standing relationships – including research relationships — built over time.  Thus split-site and blended-learning PhDs of a shorter duration were becoming a viable avenue for accelerating doctoral training, with much bigger potential for great impact and benefit for all participating institutions.

In addition to these, the ACU facilitated three-month long research fellowships. An example was a doctoral fellow from Murdoch University in Australia who had travelled to the University of Cape Town for collaborative research on a South African plant found to be drought resistant, and suitable fodder during the hot and dry summer months.  Other viable partnerships included a Development Research Uptake in Sub-Saharan Africa programme that was looking to build universities’ capacity to take up research. The programme, undertaken over a five-year period in partnership with Stellenbosch University, was benefitting 22 institutions in Sub-Saharan Africa, which, in South Africa, included the Cape Peninsula University of Technology, the University of Limpopo, the University of Fort Hare and the University of the Free State.   For more on support programmes undertaken by the ACU, see Dr Newman’s full presentation via the link read more..

The ACU, founded in 1913, is the world’s first and oldest international university network, with more than 500 member institutions, 66% of which are located in lower income countries, 109 in Africa, of which 14 are South African institutions. Among other activities, the ACU manages a number of scholarship funds for post-graduate study within the Commonwealth Countries. The ACU also calls itself a convening, championing and campaigning organisation that seeks to influence change through building capacity and also scholar mobility.  It connects and convenes members in their diversity to confer about global challenges and enable students to cope through them, through initiatives such as Climate Resilience which intervened in the West Indies in assistance of university students to cope and complete their studies even after a spate of hurricanes endemic to the region.  Late in 2017 it convened students to discuss  LGBT (Lesbian, Gay, Bisexual and Transgender) issues – mostly enabling students to hear other people’s arguments that were different from their own about sexuality.  Recently, the ACU launched a new initiative called Smart Commonwealth Smart Cities – which will be looking at best practices across the Commonwealth under the Colleges Resilience Network. 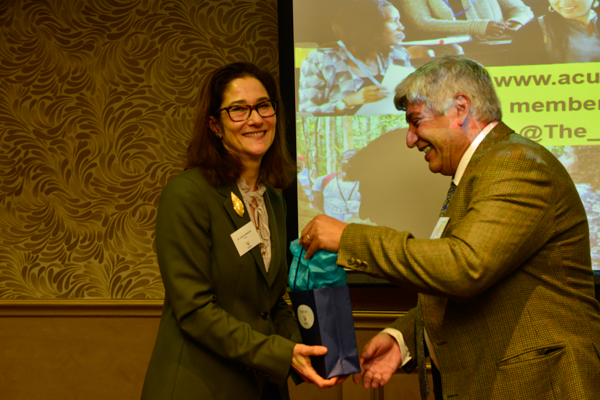