Universities need to consider inviting and involving students more in their deliberations on higher education issues, according to the Minister of Higher Education and Training, Ms Naledi Pandor, MP.  She made this suggestion while delivering a keynote address at the two-day Universities South Africa – Association of Commonwealth Universities (USAf-ACU) symposium that was held at the University of Johannesburg last week. The meeting was held to deepen a sector-wide conversation on Developing the Capacity of Early Researchers.

The Minister, who had had occasion to meet with the South African Union of Students (SAUS) National Working Committee  twice during the first quarter of 2019 (first on 10 February and subsequently on 17 March), said she had posed a question during the latter set of engagements, on what kind of a higher education system young people were imagining.  “I also asked them what it is that they expect to acquire through undergraduate and post-graduate study.” The Minister said students needed to be given a deeper understanding of “why we are a higher education sector. They must understand not only what a system of higher education we should strive to achieve but also the strength of ideas this sector brings forth; the weight of arguments we put forward and the space higher education creates for debating intellectually and in a civil manner with one another.”

She said as part of moulding students into responsible future professionals, “we also need to look at inherent features such as students’ writing ability and ability to engage with respect and a will to listen to opposing ideas and views.” The Minister said this matter was so close to her heart that she foresaw continuing to contribute personally to a range of deliberations with young people in future, “even when I am no more in a position of influence… I do hope that the questions I posed to the student leadership I met with, yesterday, did sink in,” she said as she concluded this part of her address. 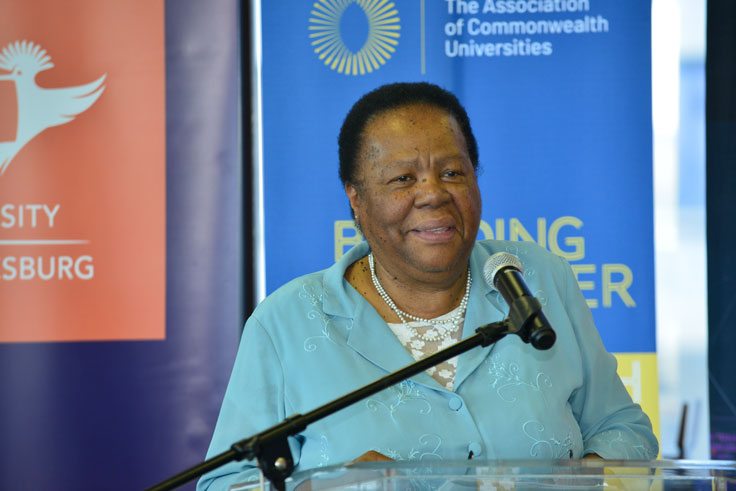 “The challenges confronting doctoral candidates call for a radical rethink in government’s funding policy to close the gaps in funding towards doctoral training,” the Minister of Higher Education and Training, Ms Naledi Pandor, told the 70-strong gathering.

On the symposium theme, Minister Pandor said even though South Africa’s higher education system had seen a steady growth in research output (that stood at 9,000 peer-reviewed articles a decade ago and had more than doubled to 22,000 currently), the sector was doing well to pay attention to increasing the number of PhD graduates to not only bolster supervisory capacity, but also to increase equity and diversity in the system.

She acknowledged that notwithstanding the numerous support interventions funded by her department (DHET) and the Department of Science and Technology (DST), findings of a 2015 post-graduate pipeline study undertaken by Prof Johann Mouton of Stellenbosch University had uncovered numerous gaps which called for a radical rethink in government’s funding policy.  On the question of why so few doctoral students enrolled and went on to graduate, the study had found that most doctoral students worked while they studied to earn an income to support their families as bursaries did not allow full-time study.  “Interestingly more natural science than social science students study full-time and more natural scientists than social scientists graduate,” said Minister Pandor.  She added that ultimately, the system must gear up to nurture students in post-graduate education from honours level right through to completing PhDs and appointments into academic professions.

On Government’s learnings from Prof Mouton’s study, Minister Pandor said “First, we learned that we need full-time PhDs and more comprehensive funding packages. Second, we need to look at the quality of PhD supervision.  Most South African universities have PhD supervision guidelines, but they vary widely in the number of contact hours a student can expect of a supervisor. Many years ago we learned that the average number of contact hours between supervisor and student was two…  This means that PhD students are left to their own devices.”  She said she wondered whether universities told their academic staff that they (institutions) were receiving a substantial subsidy from the DHET for each postgraduate student who graduated. “Or do researchers focus on publishing articles and papers that pump up their foreign-travel research budgets?”

As she reiterated her case for building a new generation of academics, the Minister of Higher Education and Training said the sector needed to pay serious attention to strategies in place for a) attracting new talent into academia and b) developing pathways for career progression to professorship while seriously interrogating systemic blockages to the promotion of blacks to the rank of Professor. She also invited universities to rethink an emerging trend to outsource and casualise the academic profession by replacing permanence of tenure with hourly pay. “I know this is a global development, but our universities don’t have to follow the global trend.” She said the implications of casualisation of the academic profession were dire for the transformation of the academic workforce, and for the achievement of equity.

In conclusion, the Minister said the solution to academic staffing lay in the DHET’s University Capacity Development Grant and in government’s commitment to boost university finances to 1% of GDP over the coming five years. “It’s up to universities to decide what to do with this funding. But it would make sense to spend it on academic staff.” 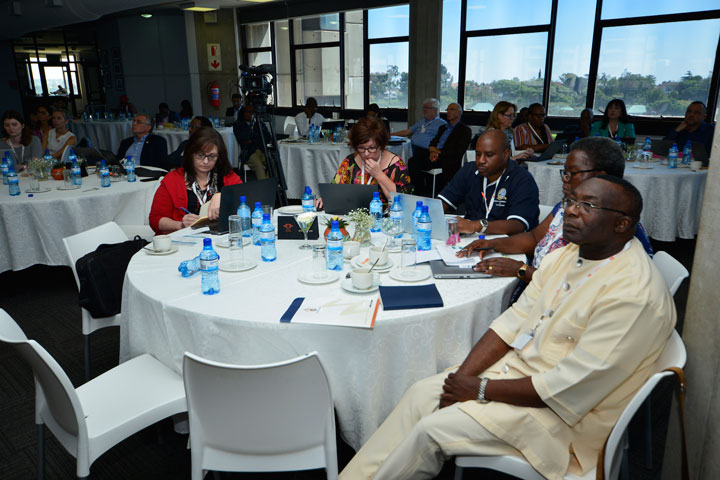 A partial view of the 70-strong delegation of attendees comprising vice-chancellors, deputy vice-chancellors: research and senior directors and managers responsible for developing, promoting and maintaining the research enterprise at their institutions. Also in attendance were four officials from the ACU; scholars from SA’s and Zimbabwe’s universities who had directly benefitted from ACU support programmes; three officials from the DHET’s University Branch and three from the National Research Foundation.

Deliberations at the event covered numerous areas, namely, a) the importance of supporting emerging researchers; building a cadre of emerging scholars for South Africa’s higher education; challenges they face and support programmes available to them from the ACU and South Africa. The ACU has a proven track record of working with its members to support the development of early career researchers at both individual and institutional level. In South Africa, in addition to support interventions offered by the DHET and DST, numerous universities also offer dedicated training programmes in support of post-graduate students for their success.

The USAf-ACU symposium aimed to achieve agreement on new interventions and projects intended to support early career researchers in South Africa and the wider region.