Collaboration between South Africa and Japanese universities should become a catalyst for sustainable development in South Africa and the African continent. It will also play an enormous role in the realisation of the African Union’s Agenda 2063 – a programme aspiring to create prosperity for Africa through inclusive growth and sustainable development. These were the words of Professor Cheryl de la Rey, Vice-Chancellor and Principal of the University of Pretoria. Prof de la Rey, who is also Chairperson of Universities South Africa’s Research and Innovation Strategy Group, was speaking at the re-launch in Pretoria last week, of the South Africa – Japan Universities Forum (SAJU).
Addressing a group of 60 delegates at the CSIR International Convention Centre on 7 December 2016, Prof de la Rey said last week’s event was marking the revival of the SAJU Forum in South Africa — initiated in 2007 to facilitate collaboration between universities in the two countries, in solving local and global challenges, and contributing to sustainable development. These goals would be achieved through the sharing of ideas, facilitating students’ mobility in both directions and collaborating in high quality research. The CSIR event was a precursor to the main re-launch ceremony to be held in Japan in July 2017. 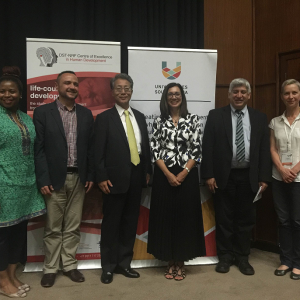 Prof de la Rey said the decision to revive this relationship was made by Universities South Africa’s Board of Directors in late 2015. Since then, bilateral discussions had been taking place between South Africa’s and Japanese universities through the Department of Science and Technology (DST). As a representative association of South Africa’s 26 public universities, Universities SA (USAf) would be the co-ordinator in this relationship in collaboration with the University of Pretoria’s Centre for Japanese Studies (CJS).
“Japan is a top performer by any measure of scientific excellence,” said Prof de la Rey. “An opportunity to collaborate with them is something we must grasp with both hands.” She said she saw this relationship enabling the two countries to resolve the challenges confronting South Africa in biodiversity, climate change, energy and varying disasters, to cite a few. “We can pool expertise, build mutual capacity and increase output of doctoral graduates across these areas while also giving our scholars exposure in international laboratories conducting research in these disciplines.” In summing up, Prof de la Rey said with a solid foundation now laid, “we need to ensure that SAJU does not start on a high note only to collapse.”
Several organisations delivered messages of support to the SAJU Forum. Among them, USAf’s Chief Executive Officer, Prof Ahmed Bawa, said universities are bridges for ideas and people. “One of the crucial roles that we can play is to ensure that the migration of ideas and people does take place across systems. SAJU is a fitting enterprise to achieve that, and also to facilitate collaboration in research, teaching and learning and student mobility in both directions.” Prof Bawa said global challenges, such as infectious diseases, power imbalances and social violence also stood to be resolved within relationships such as this one. “I look forward to us coming together in a few years to celebrate notable milestones and successes in this regard.”
Also in attendance to deliver a message of support was the National Research Foundation’s Executive Director of International Relations and Cooperation, Dr Aldo Stroebel. While affirming the NRF’s commitment to support this initiative, Dr Stroebel cautioned about the great discrepancies between university types in both South Africa and Japan. He said the NRF yearned to see opportunities being created for all. “Opportunity and excellence must go hand-in-hand in ensuring that all institutions benefit from this initiative. If we are to create a greater future for everyone, we must employ a collective, multi-dimensional and participative approach.”
According to the Deputy Director General: International Cooperation and Resources in DST, Mr Daan du Toit, Japan was the first country with which the DST formed collaborative relations in science and technology in 2003.

He said this partnership had since grown in multiple areas complementing bilateral diplomatic relations between the two countries. Japan’s Ambassador to South Africa, Mr Shigeyuki Hiroki, echoed this sentiment when he said education was among top priority areas of partnership between his country and South Africa. This was evident in the African Business Education (ABE) which had already provided 83 South Africans with Master’s Degree studies in Japan, combined with internships at Japanese corporations. Mr Hiroki said to date, 26 Memoranda of Understandings had been signed between universities in Japan and South Africa, facilitating student exchanges and academic research.
In addition to education, Japan enjoys a healthy trade relationship with South Africa, manifesting in the +/-140 Japanese corporations operating in the country, creating over 150,000 job opportunities in the process. Ambassador Hiroki valued SA-Japan’s bilateral trade at over R90 billion in 2015.
The audience at the SAJU Forum re-launch comprised representatives of governments of Japan and South Africa; representatives of universities from both countries and those of organisations, science councils and business entities operating in the area of science and technology, from both countries.
From USAf, Prof Bawa has since added that the SAJU Forum presents another platform to advance internationalisation of higher education in South Africa. USAf has built collaborative relations in areas of research and student exchange and mobility with universities in Germany, India, Brazil, Russia and elsewhere.
The CJS, with which USAf will collaborate in co-ordinating the work of SAJU, is the first of its kind on the continent. Founded in 2010 to mark the centenary of bilateral relations between Japan and SA, the Centre was initially located in the University of Pretoria’s Gordon Institute of Business Science to provide a forum supporting business relations between the two countries. The Centre has since been moved to the main campus in Hatfield and is now re-located within the Humanities Faculty, deliberately to expand the opportunities it presents, to a lot more disciplines. The centre will service all of South Africa, and later expand to the entire continent. According to Prof de la Rey, it is to become a national hub with nodes at various institutions.