“Disrupt the system,” “flip the model”, “change the rules” – these were just some of the provocative statements heard at a recent symposium on developing the capacity of early career researchers organised jointly by Universities South Africa (USAf) and the Association of Commonwealth Universities (ACU).

Hosted by the University of Johannesburg and welcomed by Vice-Chancellor, Professor Tshilidzi Marwala, the symposium brought together university leadership, senior academics and researchers, representatives from the Departments of Higher Education & Training (DHET) and Science and Technology (DST) as well as the National Research Foundation (NRF).  Participants from other parts of the African continent representing their higher education systems were also in attendance. The 70-strong delegation assembled to engage on Developing the Capacity of Early Career Researchers, a topic of critical importance for the sustainability of the higher education sector and the future of the research enterprise in the country.

The challenges faced by South Africa’s universities and science system are also prevalent elsewhere on the continent. For that reason, this important engagement provided the possibility of broadening the geographical scope of collaboration. 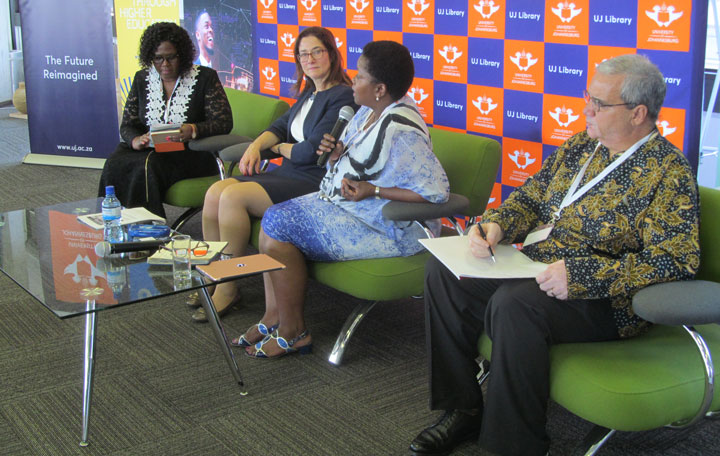 During a session titled The Importance of Supporting Emerging Researchers, chaired by Prof Xoliswa Mtose (far left), Vice-Chancellor and Principal at the University of Zululand, the NRF, DHET and ACU each presented their perspectives and also explained the interventions available within their organisations, in support of emerging researchers. 2nd from left is Dr Joanna Newman, ACU’s CEO and Secretary-General; Dr Phethiwe Matutu, NRF’s Group Executive, Strategy, Planning and Partnerships and Dr Whitty Green, DHET’s Chief Director, University Education.

Presentations by representatives of the NRF, the DHET and the ACU detailed what funding there is for the taking; new initiatives being introduced and how they can be accessed. It emerged from this session that there are more funding resources available to universities than is generally believed.  During subsequent debates and discussions, the delegates themselves admitted that resources were being accessed ineffectually and in a piecemeal fashion.

A point was also made that in the desperation to improve the system, new programmes were constantly introduced with the result that limited resources were being spread too thinly. In one of his numerous remarks the Vice-Chancellor Professor Adam Habib of the University of Witwatersrand, pointed out that the institutions should be alive to “little pots of money” for research in unexpected places such as government departments other that the DHET and the DST on the one hand and funding agencies such as the NRF on the other.  He also noted that in light of the multiple demands on the public purse, the universities should make their rands go further by making more effective use of international resources and imagining new ways of collaboration.

If there is no denying that there IS money available to support research projects and research capacity development in the country, the question that needs to be asked is what stands in the way of unleashing the country’s true research potential. Developing young researchers depends heavily on creating nurturing, supportive ecosystems which, most importantly, must provide the opportunity for younger scholars to engage intensively with senior scholars. Speaking specifically to the challenge of building an equitable and capable cohort of emerging researchers, Dr Diane Parker, Deputy Director General in the DHET, who heads up the University Branch, put it succinctly: “We have to look at the patterns. What is needed is a coordinated, coherent and collaborative response and an integrated strategy with multiple participants. We need responsive steering mechanisms that allow us to move together for policy, planning, quality assurance and funding.” 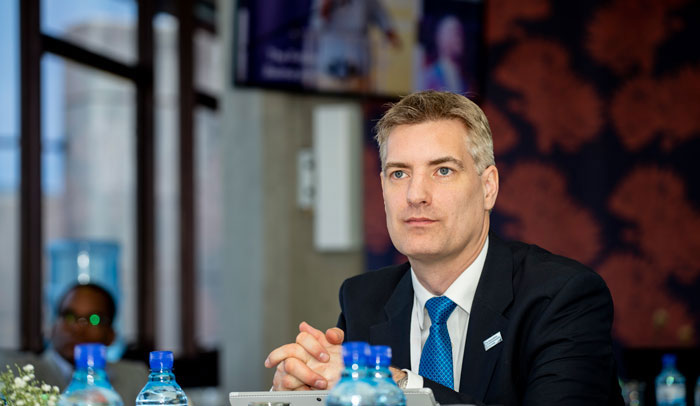 Mr Ben Prasadam-Halls, ACU’s Director of Programmes, echoed the need for “coordination for sharing resources, collaborating and joining forces across institutions nationally, in Africa and abroad.”

Summing up at the end of one session, Mr Ben Prasadam-Halls, ACU’s Director of Programmes, echoed the need for “coordination for sharing resources, collaborating and joining forces across institutions nationally, in Africa and abroad.” Inefficiency, the delegates agreed, could be avoided by investing in and collaborating on the already tried and tested programmes such as those showcased at the meeting by representatives from Stellenbosch University, University of Pretoria and the University of Cape Town.

On the topic of research itself, Professor Angina Parekh, DVC Academic at UJ challenged the delegates with an impassioned plea for the teaching-research nexus to be explored. She cautioned that while the development of research capabilities was undeniably important, universities could not afford to elevate research above teaching when academics in the system should actually do both. “The burden of teaching,” she said, “then falls on the very cohort we are trying to develop.  We have overwhelmed our lecturers.” She also emphasised that inculcating an appreciation for research at undergraduate level and inducting young students into statistical applications and methodology is common practice at overseas universities and best achieved by twinning undergraduates with top researchers.

The debate about teaching versus research tracks linked in well with the issue of career pathing, with Dr Amon Taruvinga, Associate Professor in the Department of Agricultural Economics & Extension University of Fort Hare of the University of Fort Hare sharing interesting insights of his experience of, and impact on his career of the ACU’s Climate Impact Research Capacity and Leadership Enhancement (CIRCLE) Fellowship programme. In no uncertain terms Dr Taruvinga did demonstrate that this programme’s success could be ascribed to networking, institutional collaboration and peer mentoring. While his research publications grew exponentially in number post the CIRCLE Fellowship, for this young scholar, solving societal challenges is the true purpose of research. He has since collaborated on critical projects in Southern Africa such as veld fire detection programme and an early malaria warning system. Yet, not once but on two separate occasions he has been told by his institution that while he complies with all the point requirements for full professorship, the rules on academic progression dictate that he has to wait. Who better than Professor Habib to point out that if the rules are counter-productive, it is time to change them. 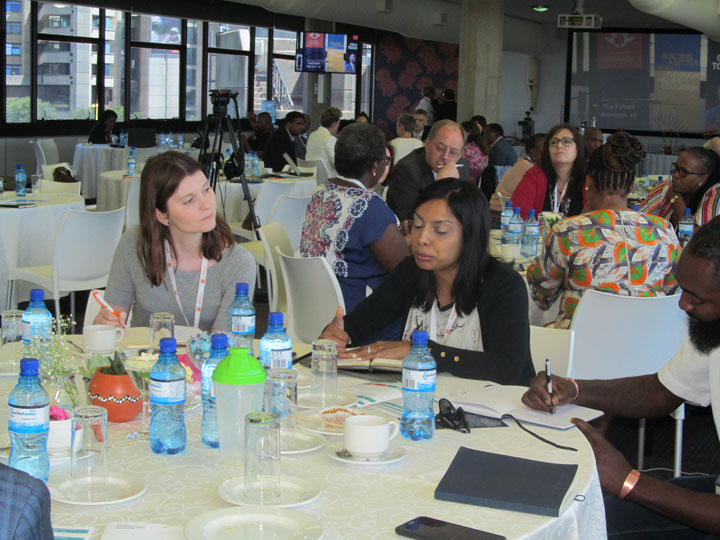 The delegates immersed themselves fully in the group discussions and made actionable remedies to the identified challenges.

Having seen and heard it all, time came for the delegates to influence the conference recommendations and next programme of action. The topics allocated to group discussions ranged from funding for early career researcher support to the specifics of university policy and strategy. Delegates also explored institutional structures and planning, training provision, mentoring schemes, creating time for research, networking, researcher mobility and creating conducive research cultures.

One thing was clear as the symposium delegates left the University of Johannesburg campus: USAf, the ACU, funders and indeed all public universities are now challenged to bring the creative ideas and concrete next steps that emerged from this important engagement to life in order to promote a stronger, richer research culture in the country that supports a new generation of academics. This will be the basis of an ongoing conversation involving USAF, the ACU, DHET, DST and the NRF.